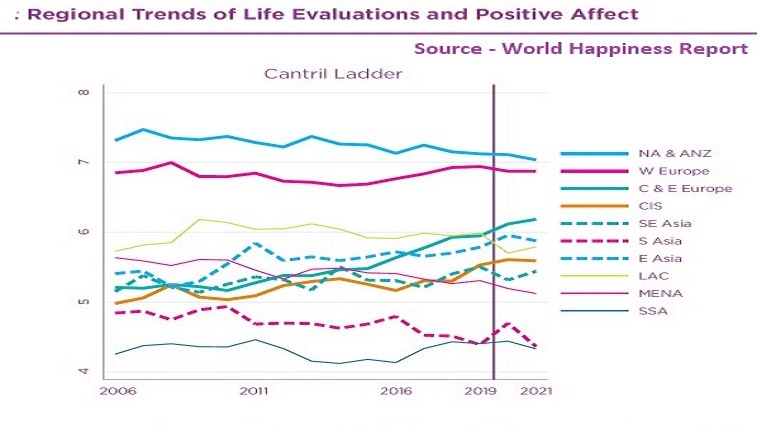 Every new year brings with it hopes of a happy new year. But are we really becoming happier?  The World Happiness Report for 2022 shows divergent trends in happiness score across countries. However, what gives lot of hopes for humanity is the surge seen in social support as the world battled pain and suffering caused due to the pandemic. Here is a look at some of the findings and methodology of the report.

The growing international efforts to evaluate happiness and bringing it to mainstream can be attributed to the UN resolution in 2011 sponsored by Bhutan. The resolution proposed giving more importance to happiness and well-being in determining how to achieve social and economic development. Supported by the UN, the first edition of World Happiness Report was released in 2012. The report is based on the survey carried out primarily by Gallup World Poll. It lists out countries using six measures – life evaluation score, GDP per capita, social support, healthy life expectancy, freedom of choice and corruption. The life evaluation score is arrived at as net of frequency of experiencing positive emotions such as laughter, enjoyment etc and frequency of experiencing negative emotions such as worry, sadness, anger. However, the sample size of survey is quite limited at 1,000-3,000 per country and whether that can give a true representation can be debated.

At one level, the report gives lot of hopes since average life evaluation score has remained largely same during 2020 and 2021 as its pre-pandemic level. However, the average value masks the deviation in the movement of score across nations and for young & the old. While some of the nations have seen their happiness score increase by one full point (in a scale of 10), others have recorded increase in stress, worry, and sadness. Even in terms of inequality within the nation, regions such as Sub-Saharan Africa and MENA have seen significant increase. On the other hand, life satisfaction has fallen for the young whereas it has risen for those over 60.

However, not all is gloomy. The most remarkable change is global upsurge in compassion which acted as a support for caregivers during the pandemic. There has also been large increase in the proportion of people who gave money to charity, helped strangers and did voluntary work over last two years. Average value of these three measures has risen by 0.25 points compared with the level before the pandemic. Whether this sustains after the pandemic would be eagerly observed.

In terms of specific countries, Finland tops the chart with a score of 7.82 (maximum – 10), followed by Denmark, Iceland and Switzerland. The top two countries were the same in first report of 2012 also but the places have changed. Even though per capita GDP is not the sole determinant, it plays a distinct role as evident from regional difference in score shown in the image. Scores for other European countries have remained largely same although it might change this year due to adverse impact of war. For USA, the happiness score has declined by about 0.25 points with fall in rank from 11 to 16. India is placed at No 136 with score of 3.78. It is placed even lower than countries like Chad, Ethiopia and Yemen which gives credence to the view that sample may not be representative. An indicator where India ranks high at No 34 is freedom to make life choices. Further, confidence in national government in India has increased from 0.53 in 2013 to 0.79 in 2021. For India, the residual value has score of -1 which reduces its rank. This is loosely the value that cannot be explained by the individual findings and hence, added or deducted from the aggregate score of the nation.

Even though the level of happiness has not changed across all the nations, references to happiness in text across both books and social media has increased sharply. Parallelly, references to income and GDP have fallen which might mean changing priorities of life.

And what is the role of governments in improving the happiness of its people. The report notes that public feels angry with political leaders who are perceived as being unable to solve growing inequalities, corruption, violence and insecurity. It mentions four deliverables for the governments – rule of law, quality of regulations, control of corruption and effectiveness of governance. For individuals, it doesn’t provide any prescription but generosity, extending social support and volunteer work are  some of the ways individuals can add to the collective happiness.

Hope we work towards making it ‘A Happy New Year’!