Has The Unemployment Rate Come Down? – Analyzing PLFS Report 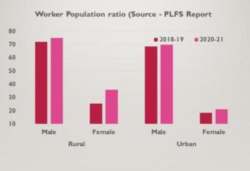 Periodic labour force survey (PLFS) for 2020-21 (July-June) shows that unemployment rate (UR) has declined over previous years. Amidst the raging pandemic, this appears counter-intuitive. So, has UR really declined or there is more to it than meets the eye. Here is a look at the details explaining the same.

PLFS was started just four years back and is done by NSO (National Statistical Office) to gauge actual status of employment in India. The current survey is fourth in the series and covered over 4.1 lakh respondents. As per the report totaling over 750 pages, UR stood at 4.2% in 2020-21, lower than 4.8%, 5.8% and 6.1% respectively in previous three years. UR is defined as number of people seeking jobs but unemployed divided by number employed plus those seeking jobs but unemployed. While the aggregate figure may look reasonable, the segregated data across male/females, rural/urban, youths and educational level shows that there are pockets with significantly higher stress. All figures are for population above 15 years of age.

Urban India faces greater stress with UR at 6.7% against 3.3% in rural area. Even within this, urban females face higher UR at 8.6% in contrast with 2.1% for rural females. Similarly, educated workforce (highest level of education secondary and above) faces UR of 9.1%, more than double the national average. The biggest concern is the high unemployment rate of 12.9% among the youths (age 15-29 years). In urban area, this goes up to 16.6% for males and as high as 25% for females. This means one out of four females belonging to 15-29 age group and living in urban India is unable to get a job. Interestingly, while urban female youths have higher UR than their male counterpart, it is reverse in case of rural female youths.

However, the bigger question is – has the aggregate UR really come down? A look at the distribution across three types of employment – self-employed, salaried and casual labour gives some hint at that. Between 2018-19 and 2020-21, percentage of self-employed has gone up from 51.7% to 54.8% in rural area and from 31.8% to 33.2% in urban area. On the other hand, salaried jobs have actually seen a dip, although marginally. This means whatever additional jobs have been created during the period, it is largely in the self-employed group. Further, higher share of self-employed jobs also affects the average earnings as total buying power of the economy would be largely constant. As per the report, while average earning of a self-employed person has risen by only 3.5% between 2019-21, it has increased by 11.7% for salaried people. (Adjusting for inflation, this implies a decline). Average earning of self-employed, which was 65% of the earning of salaried person, has further come down to 60% in 2021. This is the fallacy of declining unemployment. Even though UR has come down, it has come with a decline in quality of jobs with more people taking up self-employment and also, a decline in earnings.

Despite the decline in quality of job, greater number of people are seeking jobs now. This is reflected in increasing Labour force participation rate (LFPR) which refers to the percent of the population which is employed or is seeking a job. Between 2019-21, LFPR (for age 15 years and above) has increased from 50.2% to 54.9%, a sharp increase of 4.7%. This is a positive development as lesser individuals seek job when they perceive those chances of getting a job are low. Even though LFPR is a slightly complex term to understand, it is widely used to gauge actual unemployment. An easier term is Worker Population Ratio (WPR) defined as the percentage of workers in the total population. WPR for Indian economy (for age 15 years and above) rose from 47.3% to 52.6% during 2019-21. This means nearly 7.3 crores more person started earning in the economy (including self-employed) between 2019-21. (Assuming population of 135 crores in 2018-19, growing at 1% annually and 74% being above 14 years of age). With total households at 33.6 in 2021, average person employed per household goes up from 1.44 to 1.60.

A unique characteristic of Indian economy is that female participation in the labour force is very low. LFPR for males stands at 77% against only 32.5% for females. This is even worse in the urban area at 23.2% against 36.5% in rural area. As stated earlier, a higher UR for urban females implies lack of opportunities for them which pushes more females out of the labour force.

The survey gives lot of other information also. For instance, self-employment forms as much as 55% of employment in rural households against only 33% in urban area. Jobs with regular salary accounts for only 13% of jobs in villages against 42% in cities. This is another reason for greater distress in rural area. About 61% of rural workers are engaged in agriculture, either working on own farm or as casual labour, with the share going up to 75% for females. The figure is higher than 57.8% in 2018-19 implying increasing dependency on agriculture which is worrisome. Biggest employer in urban area is Trade, hotel and restaurant accounting for 25% share followed by manufacturing with 20% share.

Salary level of casual workers in rural India is also nearly same at Rs 8,400 for male and Rs 5,500 for females (assuming 25 days of work).  Salary level of an urban female is nearly 80% that of males and only about 68% in rural India. The ratio is even worse in case of self-employed at 40-50%. While females are certainly underpaid, a part of the disparity is also because of the fact that many females work for smaller hours. Average hours worked by a female worker in a week stood at 37.8 hours, nearly 20% less than males at 47.2 hours.

Trivia – More than 57% of males worked for more than 48 hours in a week in urban India against 49% in rural India.

The Year That Was – Domestic

State Of The Economy